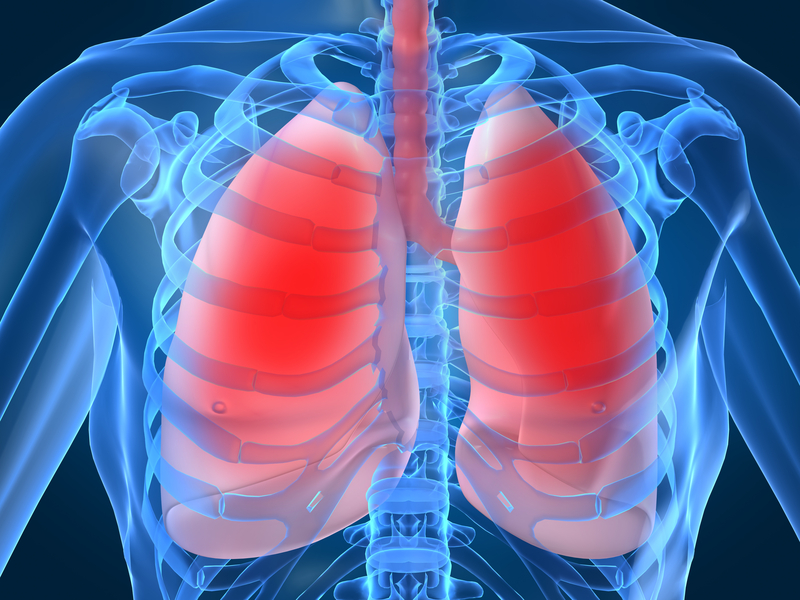 The negative attributes of chronic pulmonary disease extend from the individuals burden into a major undertaking at the society level through decreased performance and immense economic costs.  Chronic obstructive pulmonary disease (COPD) is characterized by impeded airflow from the lungs causing very difficult breathing.  COPD can be stratified into two different forms: chronic bronchitis characterized by a serious cough alongside an overproduction of mucus or as emphysema characterized by long-term damage to the lungs.  A major risk factor for developing COPD is a history of smoking, as well as pollution, exposure to harmful fumes and cooking flames, which all cause irreversible pulmonary damage.  Symptoms of this disorder most notably consist of persistent coughing, mucus buildup, infection in the lungs, strenuous breathing, wheezing, and subsequent fatigue.  Many drug therapies have been implemented to treat the side effects of pulmonary disease including steroid usage.  The necessity of novel treatments for COPD is building as progress has reached a standstill in the treatment of this harmful disorder.

Many researchers have turned their attention to the usage of Chinese herbs in the treatment of chronic disorders, including pulmonary disease.  A recent Chinese study sought to shed light on the use of the compound Chinese herb, Bufei Yishen, in the treatment of COPD.  Bufei Yishen compiles 12 different Chinese herbs to create a powerfully diverse compound with many therapeutic uses.  Building off of the already known benefits of Bufei Yishen in treating the symptoms and preventing exacerbation of lung damage, this project aimed to craft a mechanism of therapy to explain any beneficial qualities and components of this traditional Chinese medicine.  Systems pharmacology method was used to summarize the bioavailability and activity of Bufei Yishen amidst a complex network of ingredients and mechanisms.  This method also included targeting key diseases that are impacted by these molecular functions.

The components of Bufei Yishen (BYF) were determined and assessed on a complex network map to ascertain the targets of individual compounds in the hopes of creating a model of therapy.  Three major compounds were isolated from the herb that affected the most targets: quercetin, kaempferol, and beta-sitosterol.  These isolated compounds exhibit many capabilities including pharmacological activity, anti-inflammation, blood pressure depletion, and anti-oxidative activities.  These remediating benefits and functions relate to the treatment of various disorders of the respiratory system and alternative diseases found within the target-disease network discovered for Bufei Yishen.  This optimistically suggested the applicability of this formula to other cancers and diseases included in the cardiovascular and immune system.

The effect of BYF was observed in mice exposed to cigarette smoke and bacterial infection, mirroring the risks of chronic obstructive pulmonary disease.  The researchers observed improved lung functioning in mice supplemented with BYF through the prevention of vessel thickening and lung injuries.  Positive effects were also observed on comorbidities of COPD including ventricle inflammation in the heart chambers.  Utilizing a modeling summary of the components in Bufei Yishen, researchers in China were able to confirm its therapeutic benefits for the treatment of chronic obstructive pulmonary disease through the isolation of its 12 components and individual functions.  This study serves as a model for future pharmacology systems studies useful to evaluate the composition and mechanisms of Chinese herbal therapy.